On October 9 2017 it will be exactly 50 years in the past that the Dutch queen Juliana van Oranje-Nassau gave permission for the establishment of the 'Groninger Subfaculteitsvereniging "De Chemische Binding"'. Although De Chemische Binding already existed since 1959, it became an independent association on October 9 1967. Since then October 9 is seized every year to celebrate the birthday of our association.

October 9 2017 will be an unique birthday for everyone who is well disposed towards our association. It will be the 10th lustrum for De Chemische Binding. This will be celebrated hugely by members, alumni and staff. This requires large preparations. This page will be used to keep everybody up-to-date as much as possible.
Between now and October 9 2017 three different committees will work hard, together with the upcoming boards, to make this lustrum a real feast.

All this hard work will be concluded by the amazing two weeks from October 9th - October 19th in which the Lustrum Committee will serve you unforgettable activities and the History Committee will be presenting their new, refined and interesting Lustrum book! 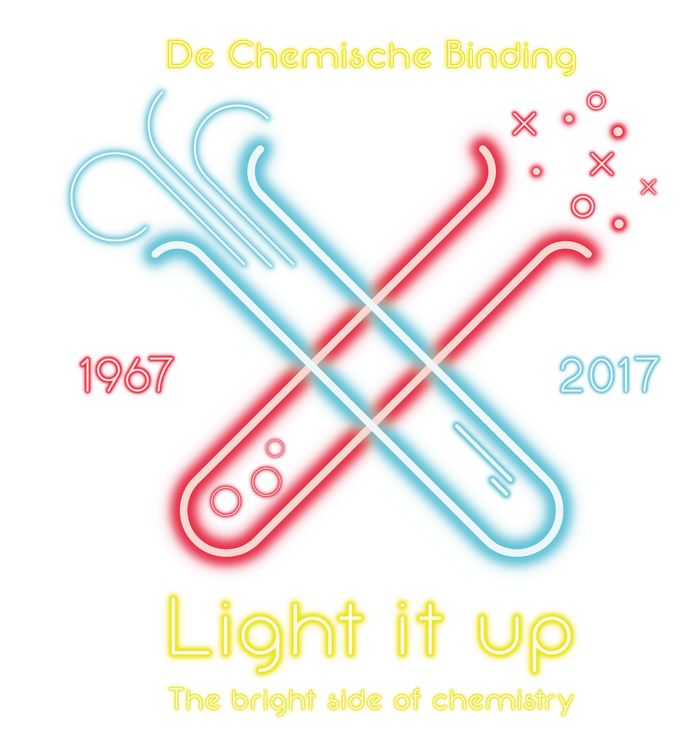 The logo of the tenth lustrum of De CB

On October 10th the lustrum theme of 2017 was announced to the association during a memorable party in 't Gat van Groningen: "Light it Up, The Bright Side of Chemistry". During the run-up year towards the lustrum activities will be organized in collaboration together with several committees in order to give you a small taste of what the lustrum weeks (October 9th 2017 - October 19th 2017) will have in store for you!

So far, we won't reveal much until the full list of activities is presented. However, we can reveal that the alumni day will take place on October 14th. On this saturday we will organize a day during which our alumni are able to meet and talk about the past, present and future. This will of course be accompanied by interesting talks, beverages and some great company.

The committee can be viewed here.